In leadership, sometimes you may wonder if you are good enough. It doesn’t matter what you’re setting out to do. When this particular worry creeps into your head, it can spoil everything. What can you do when you feel like you’re just not good enough to make the cut?

Here’s what leaders can do to not worry if you’re good enough:

The first problem of worrying you aren’t good enough is that it urges you to compare yourself to other leaders. This is a scarcity mindset because it assumes that there isn’t enough to go around, no matter what it is you want. Just because another leader has what you want doesn’t mean you can’t have it as well.

It’s easy to worry the other leader is better than you when you don’t even know him or her. Take some time to get to know the leaders you admire. By connecting with others, we see them for who they really are, flaws and all. Only then will you recognize we’re all the same, with no one person better than another—we each have strengths and weaknesses.

…along with a lot of other related words. You’re always going to worry you’re not good enough when you hold yourself up to an impossible standard. The danger signs this is happening are found right in the language you’re using: should, ought, or any variation thereof.

Realize Nothing Good Ever Comes Out of Hate

Worrying you aren’t good enough erodes your self-confidence so that you discount your past accomplishments. Once you’re down like this, it’s very easy to become trapped there. How can you expect anyone to love you if you don’t love yourself and believe you’re worthless? Remember, what we focus on expands. If you go around thinking you’re not good enough, others will tend to respond to you that way. It can quickly become a self-fulfilling prophecy.

In the end, the best way to defeat this worry about being good enough is to be yourself simply. No one needs another clone of whatever leader is famous in the moment. It’s always better to embrace the uniquely wonderful person you are. Take the time and effort to learn to love and appreciate yourself. This is the best way to start feeling, thinking, and behaving as if you are good enough as a leader!

I have a solution to help you change your mindset with actionable steps you can use now.

Grab a copy of my ebook bundle: “Why Worry” & “Staying Positive in Tough Times.”

Click here to get your bundle delivered to you immediately! https://drgenevaspeaks.samcart.com/products/creating-a-positive-mindset-bundle

Dr. Towanna Burrous, President, CoachDiversity Institute is a best-selling author, trainer, and an ICF professional certified coach (PCC) based in Washington, DC. As a much sought after executive coach, Towanna’s mission is to empower diverse communities through executive coaching. Her role is to test, re-test and ultimately drive the organization’s overarching vision, strategy, and tactical direction. The CoachDiversity team delivers training and curriculum for to-be coaches and customized diversity and leadership programs for corporate and individual clients.

Towanna has spent the past 28 years in both federal government and the private sector that has led to her serving a broad range of business executives, sales, and IT (information technology) professionals. She delivers custom keynotes and coaching and training programs designed to assist organizations in their efforts to equip their leaders and key contributors with the skills and competencies needed to excel in today’s challenging business environment.

Towanna is a trusted partner and problem solver for many clients tackling morale, employee retention, employee engagement, training and development in the post-recession world.

As founder of the Black Life Coaches network, she has helped over 600 life coaches, counselors and therapists from the United States, Canada, United Kingdom and South Africa. Towanna is currently in the process of earning a Doctorate of Education from the University of Pennsylvania. She has a Master of Science in Education from the University of Pennsylvania, a Doctorate of Divinity from Elbon-Solutions College of Ministry and a Bachelor’s degree in Chemistry from Howard University. She’s been featured in Speakers Magazine.

Please share this podcast & let us what you think, Bass started out as a fundraiser working for the United Negro College Fund and United Way of NYC, to raise funds for various charities represented by the United Way. Bass exceeded her target fundraising goal by 30% within the first year and started to hone her skills as a communicator, writer and presenter to tap into her passion as a media expert.

Bass understands what it is to press reset and change the course of one’s path by embracing setbacks. “I’ve been through a lot mentally, spiritually and professionally. With that said, I bring determination and courage to each campaign, project and client I work with because I now understand the power of pressing reset for one’s brand.”

Please share this podcast & let us what you think,

New Detroit was built on community engagement the old-fashioned way: roll up your sleeves, look eye to eye, be at the table, and confront, but always respect.

Shirley Stancato, President and CEO of New Detroit, Inc., joined the organization over 15 years ago.

She had a long career with Bank One as Senior Vice President and an officer of that company.

Now, she is the longest serving CEO of New Detroit, the first urban coalition and the only organization in our community dedicated exclusively to race relations—and nothing more.

She is the last in my Leadership Lessons interview series I did with The Senior Solution. 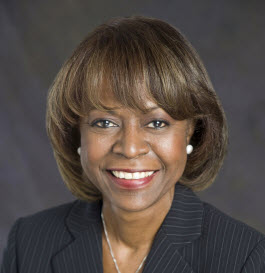 “New Detroit is not a diversity organization,” Stancato said.

“We don’t use the D word. While diversity is important because diversity embraces gender and age, our organization is solely focused on race.”

New Detroit believes that it is important to focus on structural racism and institutional change.

That kind of change is long term.

So, in order to do that, New Detroit makes sure that they engage the educational community, the health community, and other grassroots civil rights organizations.

In addition to African-Americans and whites, New Detroit is also representative of other racial communities in and around the city, including Latinos, Arabs, Native Americans and Asians, working together to improve race relations for people of all cultures.

“We believe that if we improve education, people of color will be able to move forward,” Stancato said.

“So, we focus on education, on minority business development, to improve race relations to achieve our overall mission.”

It’s all about the people and relationships not the process.

Indeed, New Detroit is all about relationships. It’s about dealing with people from all walks of life, all races.

“We believe that everybody needs to be at the table, as we say at New Detroit, providing their experience and expertise, in order for us to move our community forward,” Stancato said.

“At New Detroit, we’re about closing the gap.”

In addition to being a fertile ground to break past the barriers of race relations, youth development is a key component of the work at New Detroit.

Some of them believe that marching is important.

“They’re looking for a place to be able to have authentic conversations, a safe place where they can ask questions and not be judged about people who don’t look like them,” Stancato said.

“In the eyes of some of their parents, racism doesn’t even exist.”

Stancato urges that the relay method won’t work well in this season. Running the race with our heads down, passing the baton, and sitting down won’t fly.

“Rather than passing the baton, I suggest that we hold the baton together—running this race together.”

Book Dr. Geneva to speak at your next event by clicking here. 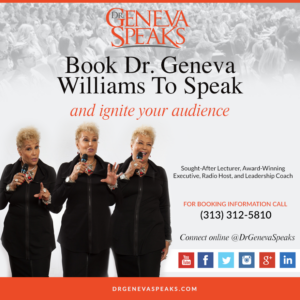